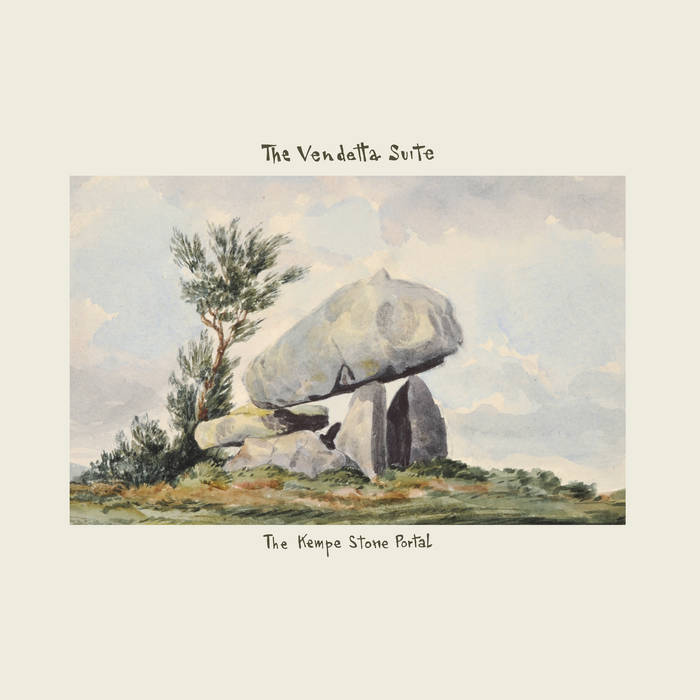 Chris. What a fantastic album! A very nice ride indeed!

The Kempe Stone Portal is the long awaited debut album from long time musical adventurer The Vendetta Suite. It arrives on Hell Yeah Recordings on June 25th, and spans over 20 years of diverse musical experiments. In the words of label boss Marco, "it's a nice ride."

Gary Irwin started dancing in 1990, when he was drawn to the dubbed out and psychedelic sounds of Andrew Weatherall and The Orb, at the same time falling for the forward looking house and techno played by David Holmes and Iain McCready at their regular nights at Belfast's Art College. After studying music technology and performing arts, Irwin gave Holmes a cassette of bedroom produced techno and it started a long and fruitful relationship that has continued to this day.

In the intervening years, Irwin has been the in-house engineer at Holmes' Exploding Plastic Inevitable studio and label, has engineered and remixed with him, released on his labels and written music for his Holy Pictures album, all while picking up credits on labels like NovaMute, Sabrettes, 13Amp and many more. As time passed, Irwin explored non-dance sounds such as krautrock, library music, synth and 80s b-sides before more recently circling back to acid house, downtempo and Balearic. All of this and more informs this panoramic 12 track album, which is a testament to a life spent submerged in many different sound worlds.

The Kempe Stone Portal opens on the ‘Neon Secrets’, which along with tracks like ‘Morning Star’ and ‘I Am The Ghost In My House’ betray Irwin’s love of wonky, shimmering experimental synth-pop musik. They are glistening tracks with heavenly harmonies that are truly life-affirming in their richness. Elsewhere, ‘Purple Haze, Yellow Sunrise’ is an homage to his early experiences of Balearic acid house music from the late eighties and early nineties with a not too subtle reference to the narcotics of the time. ‘Who Do You Love’ was Irwin’s first non-dance music production in 1998, a cover of The Jesus and Mary Chain's version of the Bo Diddly classic, with guitar feedback and distortion drawing you into a murky world of fuzzy sonics.

‘Della Notte’ came 10 years after, with rumbling toms, bubbling synths and phased Rhodes making for a psyched-out post punk dub. Seasonal sleigh bells and obvious krautrock influences abound on ‘Christmas in Cologne’ while ‘Maybe Tomorrow’ is Air meets Phil Spector on a beach at sunset. ‘Warehouse Rock’ is a dubby acid track that follows on from where 2017 track ‘Shut Up Ya Dub!’ left off, but with a more experimental approach that found the artist limiting himself to a 303, drum machine, dub effects and samples. If King Tubby were to release on Acid Trax, this is how it would sound. Shorter tracks ‘Spring Blues’ and ‘The Adult Section’ were originally made for a modern library music side project and are brilliantly suspensory pieces of lush electronics, yawning chords and gentle rhythms that empty your mind of any tension.

This is a storied album that traverses different musical worlds with style and skill. Some are old, some are new, but they add up to a long player that is both fascinating and timeless.

BACK photograph by David Irwin, 1977

Sampa The Great joins the show to discuss her release, "As Above, So Below".